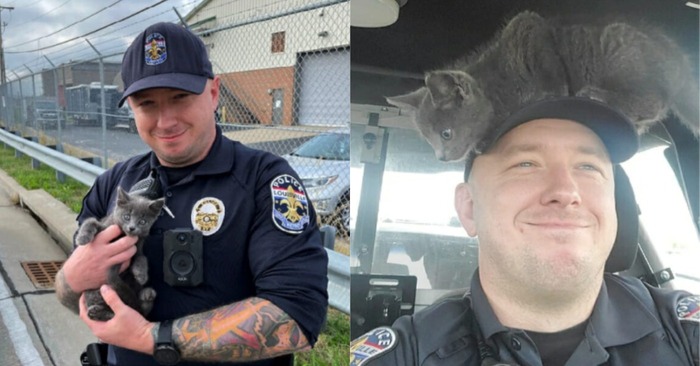 A cute happy ending story of a homeless cat

Pets often appear in our lives in most unexpected moments, we appear just in the right location at the right moment to adopt an animal.

And that’s when a police officer was doing his job and saw a homeless cat and decided to adopt her.

An officer McDermott from Kentucky was on his duty, when he caught a cat burglar. A homeless kitten was hiding beneath his car.

The officer was able to entice the cat out with cheese.

And as the food is the best way to melt the animal’s heart these two immediately established a warm relationship.

They got along so well, that the officer decided to adopt her.

A cat named Banshee became the officer’s beloved one and will now have a beautiful life. And the news became known in the department and they titled the story “Fairy tail ending.”

We know many stories like this when an officer adopted an animal and it seemed some of them have a soft spot for animals.

And an officer McDermott is a real animal lover, as he already had two cats, two dogs, two snakes, and even a bearded dragon.

In her new home the cat will have a lot of friends and will be loved.