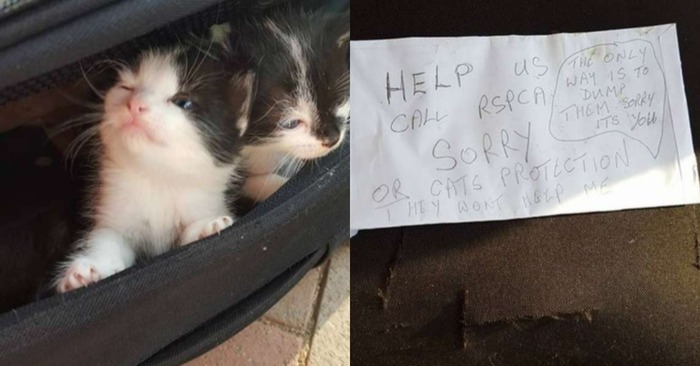 Poor animals, that were left alone on the street

It’s hard to imagine someone abandoning a sweet litter of kittens in a suitcase on the street, but such a thing happened in United Kingdom. And the felon even left a message.

Kaysie Sheridan discovered a suitcase near the school’s door when she went to pick up her son Andrew from preschool.

She decided to open and see what’s inside and found a litter of sox kittens and a note: “The only was is to dump them sorry it’s you.”

The message also said: “Help us phone RSPCA or Cat’s Protection.” Sheridan was amazed and took the kittens to her mother Sue, who knows a lot of things about kittens.

Sue Sheridan told: “It wasn’t at all beautiful inside the suitcase, there was a towel covered in blood, which we think mother gave birth on.”

The family took them to the vet and they are feeling well after it. They also decided to keep three of them.

“Three of them will be kept in our family. My mother, myself and my grandmother will all keel one.” wrote Kaysie on Facebook.

However many shelters and rescues are full, it isn’t the best decision to left the kitten on the street. The best thing is spaying and neutering them in order to be safe from the pet overpopulation.

“Whoever did this wasn’t in a position to take care of them, but also it isn’t a pleasant thing. And all I can do is look after them, and it melts my heart.” Sue Sheridan said.